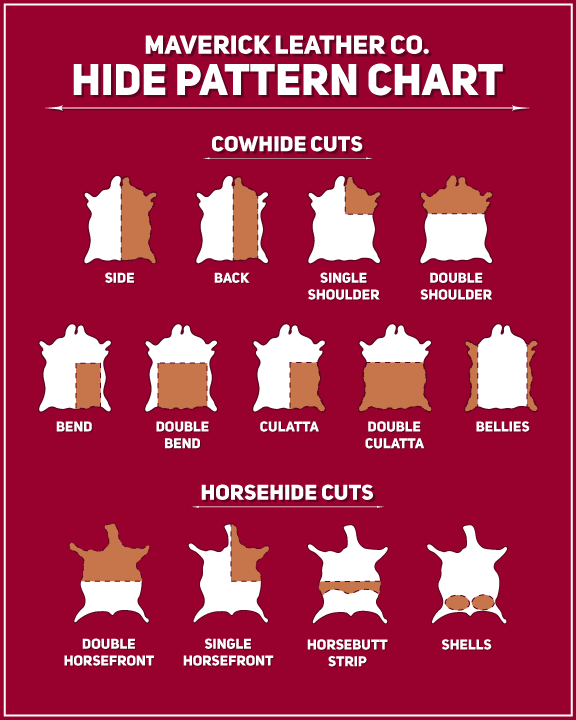 Cut type or hide pattern, put simply, describes the part of the animal hide that the leather piece comes from. As you learn more about the various cuts we offer you can refer to the images below to get a better sense of their size and shape.

Below are the different cuts you can expect to see for our various cow products. You may find that other suppliers/tanneries refer to leathers as bovine, this is just another way of saying leather from a cow.

As the name suggests, a side of leather is simply one half of the hide, split from the whole just about where the spine of the animal would be. This is the most common cut of cow leather used in the industry. Here at Maverick, most of our leather is sold by the side, which may be different from what you are used to seeing from other leather suppliers who tend to sell it by the square foot. Selling by the side allows us to offer the same wholesale prices at lower volumes to our smaller batch customers.

Essentially the cow version of the Horsefront, a shoulder is one half of the front (neck side) of the hide. It should be noted that a shoulder is not the entire front half however, rather it is the area over the leg of the animal, hence the name. Shoulders are also sold as double shoulders, which just means both halves of the front are sold together rather than being cut in half.

A bend is similar to a back in that it has also had the belly removed. However, in addition to the belly, a bend is also missing the neck which is what differentiates this cut from a back cut. This means that a bend cut of leather will have straight edges, with three of its four edges being straight cut. Just like a back cut, a bend can be single or double. A double features both halves of the leather with belly and neck removed while a single is half of a double, cut down the spine.

A culatta is the rest of the hide that remains once the front shoulders have been removed. Because it features the back area as well as the area over the rear legs, a culatta is the majority of a side. Culatta cuts can be single or double, with a double featuring both halves of the hide without the shoulder cut. A single is just half of the double split down the spine.

The belly cut is, as the name suggests, the underside of the animal. Since this is where the hide is split, the belly cuts are narrow and their edges are not straight cut.

Below are the different cuts you can expect to see for our various horse products. You may find that other suppliers/tanneries refer to leathers as equine, this is just another way of saying leather from a horse.

A horsefront is simply the whole front half of the hide, including the neck, split in half down the spine. Horsefronts are also commonly sold as double horsefronts which are not split in half.

The strip is the area between the horsefront and the shells. It features a straight edge where it has been cut from the horse front and a winged edge where the two shells have been removed. Horse strips are long and narrow and often represent a good value for small projects where large uninterrupted cuts are not required.

Perhaps the most sought after cut of leather, the shells represent the area over the horse’s rear-end. This cut features a much tighter grain than the rest of the hide and as a result, is incredibly durable and features unique characteristics like being smooth and resistant to creasing. Because this leather is made from special connective tissue over the horse’s rear legs, shells represent a relatively small portion of the hide and must be cut off the hide in an oval shape. You may see shells listed as ‘shell cordovan’ in product descriptions.